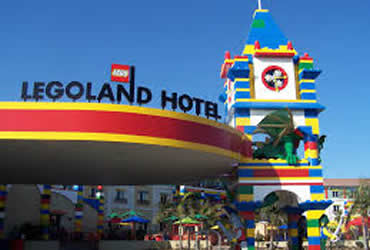 Legoland California is set to open the nation’s first Lego-themed hotel on Friday, a move that could transform the Carlsbad theme park from a daytime attraction to an overnight vacation destination.

Company officials said they expect the three-story, 250-room hotel will attract more visitors, both regionally and across the United States, and convince them to stay longer.

“It just puts us more in line with the Disney resort concept where you stay and play,” Frank Idris, the hotel’s general manager said during a tour last week, as crews placed finishing touches on the building.

The hotel is steps from the park’s entrance and adorned with thousands of Lego toy models, from knights and dragons to pirates and butterflies, including at least eight in each guest room. Each model is meticulously fashioned using the famous Lego building bricks.

Red, yellow and green Lego décor envelops each guest room – from the bedspreads to the bathroom – making visitors feel as if they’ve walked into a pirate ship, castle or adventure land. Children have their own sleeping areas and televisions in each room.

“I think this is a pretty strong sell for people looking for a destination vacation,” said Robert Niles of Pasadena, founder and editor of and former Walt Disney World attractions host. “It’s certainly unique. And unique is something that helps you stand out in a crowded marketplace.”

Just a short 25 minute drive from RentalWithAView, our luxury, kid friendsly condos are a perfect home base for your upcoming LegoLand adventures!